Coronavirus: What’s happening in Canada and around the world on Wednesday

A new variant of the coronavirus that may be more contagious has been found in a Colorado man who had not been travelling, triggering a host of questions about how the first U.S. case of the new version showed up in the Rocky Mountain state.

The new variant was first identified in England, and infections are soaring now in Britain, where the number of hospitalized COVID-19 patients has surpassed the first peak of the outbreak in the spring. The new variant has also been found in several other countries, including Canada.

Colorado officials were expected to provide more details at a news conference Wednesday about how the man in his 20s from a mostly rural area of rolling plains at the edge of the Denver metro area came down with the variant. The man is in isolation southeast of Denver in Elbert County, state health officials said.

For the moment, the variant is likely still rare in the United States, but the lack of travel history in the first case means it is spreading, probably seeded by travellers from Britain in November or December, said scientist Trevor Bedford, who studies the spread of COVID-19 at Fred Hutchinson Cancer Research Center in Seattle.

“Now, I’m worried there will be another spring wave due to the variant,” Bedford said. “It’s a race with the vaccine, but now the virus has just gotten a little bit faster.”

Public health officials are investigating other potential cases of the variant, which was confirmed by the Colorado State Laboratory, and performing contact tracing to determine its spread.

Scientists in the United Kingdom believe the variant is more contagious than previously identified ones — though they have found no evidence that it is more lethal or causes more severe illness. Experts also believe the vaccines being given now will be effective against the variant.

The U.S. has seen more than 19.5 million cases of COVID-19 and recorded more than 338,000 COVID-19 related deaths since the pandemic began, according to Johns Hopkins University’s tracking tool.

In hard-hit California, the state’s top health official said hospitals in Los Angeles County are turning to “crisis care” and bracing for the coronavirus surge to worsen in the new year.

Ghaly said Southern California and the agricultural San Joaquin Valley have virtually no ICU capacity to treat COVID-19 patients. He says some overwhelmed hospitals don’t have space to unload ambulances or get oxygen to patients who can’t breathe.

The state’s “crisis care” guidelines allow for rationing treatment when staff, medicine and supplies are in short supply.

California reported more than 31,000 new coronavirus infections Tuesday and 242 deaths. Nearly 25,000 people in the state have died from COVID-19 during the pandemic.

Ontario’s finance minister is under fire after it emerged he travelled to the Caribbean for a vacation over the holiday season. Rod Phillips said in a statement Tuesday night that he left for a trip to St. Barts on Dec. 13 after the end of the legislative session.

Ontario, which went into lockdown on Dec. 26, is advising against non-essential travel.

Premier Doug Ford said in a statement that he told Phillips his decision to travel was “completely unacceptable and that it will not be tolerated again — by him or any member of our cabinet and caucus.”

“I have also told the minister I need him back in the country immediately.” 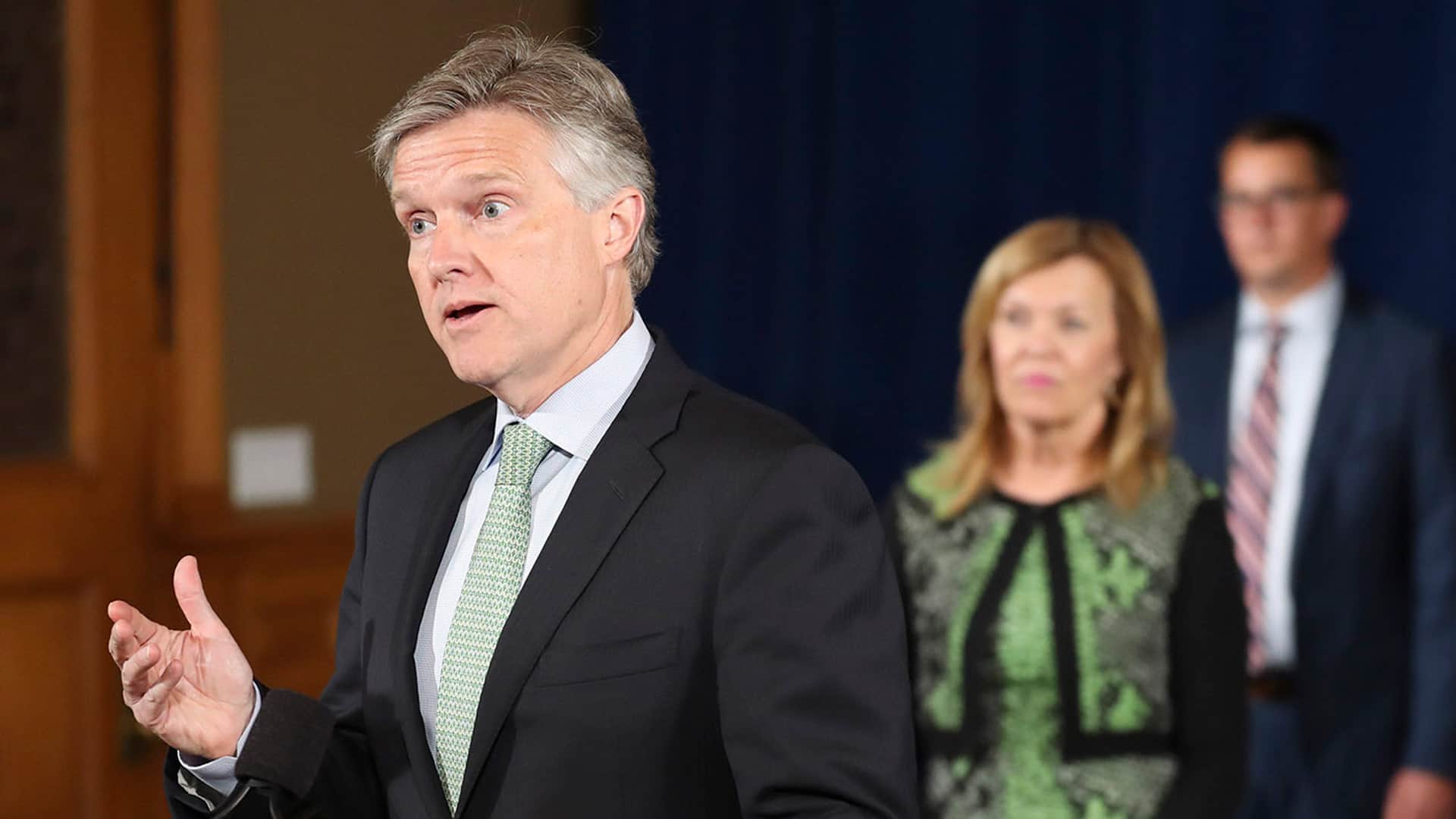 Ontario Premier Doug Ford says travel outside the country by Finance Minister Rod Phillips was ‘completely unacceptable.’ Phillips left Canada on Dec. 13 on what he called a ‘previously planned’ trip. 2:22

Phillips said in his statement that he deeply regrets travelling over the holidays.

“It was a mistake, and I apologize,” his statement said. “I am making arrangements to return to Ontario immediately and will begin a 14-day quarantine as soon as I arrive.”

Here’s a look at what’s happening across Canada:

News of Phillips’s travel came as Ontario reported nearly 4,500 new cases of COVID-19 over two days and a total of 78 new deaths. The province said 2,553 new infections were recorded Tuesday — a new daily peak — and 1,939 on Monday.

Quebec, the hardest-hit province in the country, reported 2,381 new cases of COVID-19 on Tuesday, a new single day high.

As of early Wednesday morning, more than 82 million cases of COVID-19 had been recorded worldwide with more than 46.4 million cases considered recovered or resolved, according to Johns Hopkins. The global death toll was approaching 1.8 million.

In Europe, Britain on Wednesday became the first country in the world to approve a coronavirus vaccine developed by AstraZeneca and Oxford University as it battles a winter surge driven by a new, highly contagious variant of the virus.

The British government said it had accepted a recommendation from the Medicines and Healthcare products Regulatory Agency (MHRA) to grant emergency authorization. In the European Union, meanwhile, the European Medicines Authority (EMA) said it requires additional data before it can approve the vaccine.

Meanwhile, lockdown measures in England will be extended to counter the rapidly growing number of cases of the new variant of COVID-19, Health Secretary Matt Hancock told BBC television.

German authorities have reported more than 1,000 coronavirus-related deaths in one day for the first time since the
pandemic began.

The national disease control centre, the Robert Koch Institute, said Wednesday that 1,129 deaths were reported over the past 24 hours. That exceeds the previous record set a week ago of 962 and brings Germany’s total death toll to 32,107.

While delayed reporting of statistics over holidays and weekends is often an issue in Germany, the latest figure fits a recent pattern of high numbers of deaths.

Switzerland has documented five cases of a coronavirus variant from Britain and two cases of a South African variant, a Swiss Health Ministry official said on Tuesday.

In the Middle East, the United Arab Emirates has shattered its single-day record of new coronavirus infections, with 1,723 cases recorded on Wednesday.

In the Asia-Pacific region, the coronavirus situation in Tokyo is quite severe, and the Japanese capital could potentially face an “explosion” of COVID-19 cases, Tokyo Gov. Yuriko Koike said ahead of the New Year’s holiday.

Thailand has reported 250 new coronavirus cases, including 241 local transmissions, as the country grapples with an intensifying outbreak.

Thailand has seen two major clusters developing since mid-December. One has mainly infected hundreds of migrant workers from Myanmar at a seafood market near Bangkok. And in recent days, a cluster has grown connected to a gambling den in an eastern province.

In Africa, Nigeria faces oxygen supply challenges to treat coronavirus patients in parts of the country and unacceptable laboratory delays as case numbers rose to the highest recorded in a single week, health authorities said on Tuesday.

The new warnings from Nigerian officials come as the resurgent virus strikes across much of the world, bringing greater case loads and hospitalizations.

“There is an on-going review of the chain for the supply of medical oxygen for our medical facilities across the nation,” said Boss Mustapha, chairman of Nigeria’s coronavirus task force, naming the capital of Abuja as an area of concern.

In the Americas, Panama has signed agreements with four producers of COVID-19 vaccines to acquire a total of 5.5 million doses, enough for 80 per cent of the population.

– From The Associated Press and Reuters, last updated at 7:25 a.m. ET