Meng Wanzhou launched a bid to loosen her bail restrictions Monday in a B.C. Supreme Court hearing that gave an inside glimpse into the Huawei executive’s privileged pandemic lifestyle under 24-hour surveillance, as she awaits extradition proceedings.

The 48-year-old — who has survived thyroid cancer and has hypertension — claims the changing roster of security guards who accompany her everywhere during daylight hours is placing her at heightened risk of catching COVID-19.

The two-day hearing pits Meng, Huawei’s chief financial officer, against the head of the company tasked by the court with preventing her from fleeing Canada pending a decision in her extradition case.

Lions Gate Risk Management president Doug Maynard said he believes Meng is still at risk of extraction by a foreign government and targeting by organized crime.

“We believe that the risk for some of those factors is actually rising,” Maynard said.

“We’re now two years on into this matter, and I would argue that because the opportunities are less frequent, the risk for that highest risk factor has actually risen somewhat.”

Quarantining together in apparent violation of guidelines

Meng has lived under the same set of bail conditions since December 2018, when a judge released her from institutional custody pending extradition proceedings.

She’s charged in New York with fraud and conspiracy in relation to allegations she lied to an HSBC executive about Huawei’s control of a company accused of violating U.S. economic sanctions.

U.S. prosecutors claim Meng’s alleged misrepresentations put the bank at risk of loss, because HSBC would be breaking the same set of sanctions in handling Huawei’s financial transactions.

Meng wears a GPS ankle monitoring bracelet and is confined to her home from 11 p.m. to 6 a.m. every day. But she is allowed to travel around the Lower Mainland alongside guards — who she pays for — during the day.

Her husband was the first witness.

Liu Xiazong claimed the constant presence of guards is preventing his family from spending quality time together without attracting attention from strangers anxious to photograph the woman at the centre of the high-profile international court case.

Under cross-examination, he conceded that nothing in the bail conditions actually prevents Meng from going to malls, coffee shops and grocery stores with their two children.

He also admitted that — despite her confessed concerns about catching the coronavirus — Meng lived with him as he quarantined alongside her at their Vancouver mansion after arriving in Canada on a flight from Hong Kong last fall.

The same went for their kids when they flew to Canada before Christmas.

Canada’s guidelines say you should avoid quarantining at home if you cannot separate yourself from those you live with.

‘If she gets sick, we get sick’

Maynard, who was a Crown witness, said COVID-19 was as much a concern for him and his staff as it was for Meng and her family.

He said he has repeatedly expressed concern about the behaviour of Meng and her entourage during the pandemic. 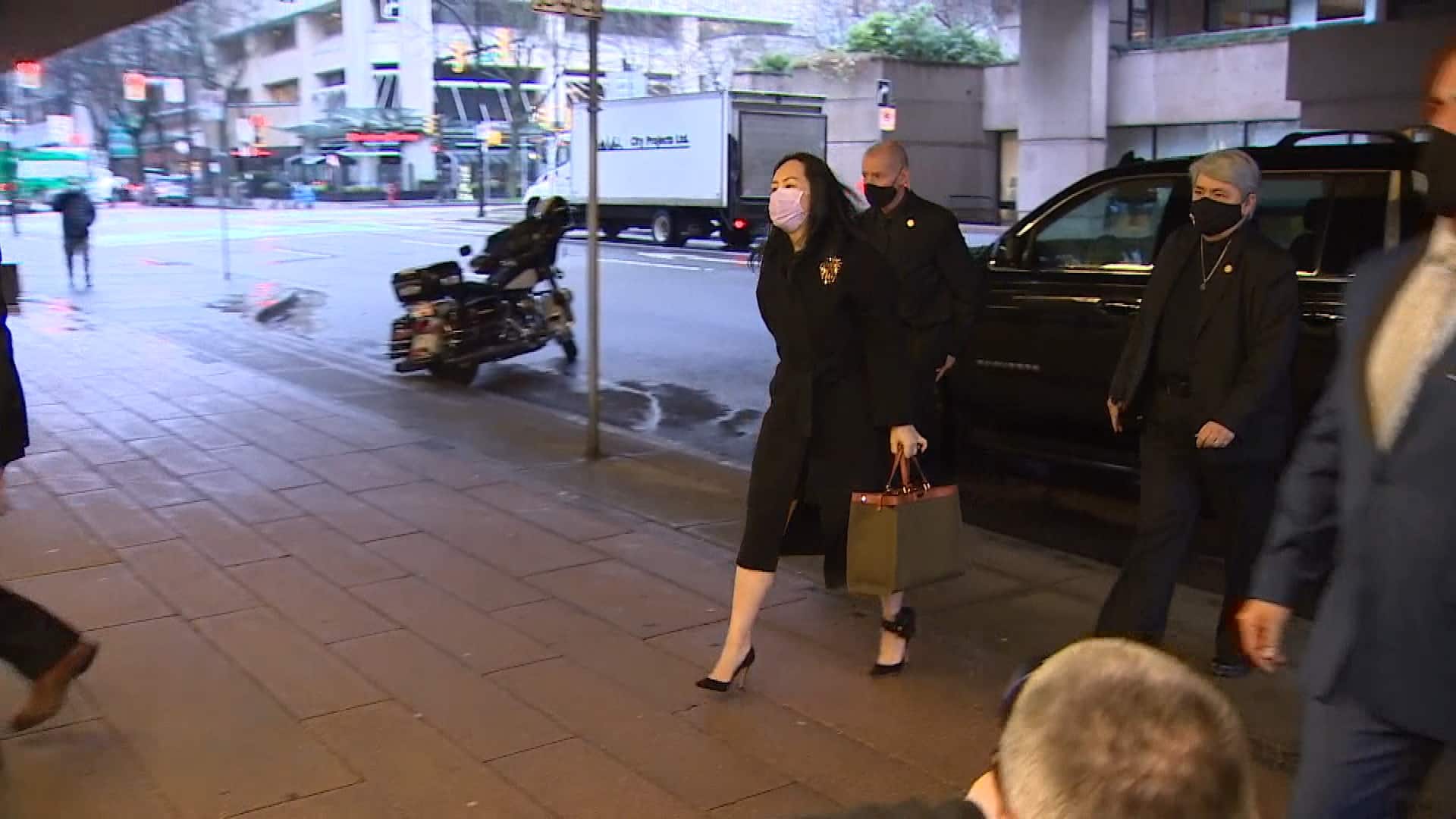 The Huawei executive is applying to vary the strict release conditions in her bail agreement. 0:49

“If she gets sick, we get sick,” Maynard said.

“I want to be careful not to be construed as the COVID police. We’re there to ensure that our client is enforcing or adhering to the guidelines because it’s for their health and their safety protection as well as our staff.”

Maynard said Meng has intermingled her household bubble with the bubble of professional people who surround her, including Huawei employees and Chinese consulate staff.

He said they have had gatherings in the past three months of around 10 people where food and wine was shared in a restaurant closed for the occasion.

And Meng has had frequent trips downtown for so-called “private shopping” sprees where Vancouver’s high-end retailers close their doors for the daughter of Huawei’s billionaire founder.

Much of the testimony concerned a picture taken by CBC photographer Ben Nelms of what was supposed to be a clandestine photo shoot on the courthouse steps last May, in advance of the release of a court decision that could have ended the case.

The participants gave thumbs ups and flashed peace signs for a victory picture in the event of a win on the issue of double criminality — the concept that Meng’s alleged offence would have to be a crime in both Canada and the U.S. for the extradition to go ahead.

None of them wore masks or physically distanced.

Gibb Carsley asked Liu to count the 11 people in the photograph.

“Does seeing this photo concern you that your wife, Ms. Meng, is not following protocols by being this close to others?” the Crown lawyer said.

“I don’t exactly know what was the COVID-19 regulations in that time in British Columbia,” Liu said.

Maynard said he disapproved of the photo shoot. The CBC learned of the event and Nelms and a reporter watched from across the street, hidden from view. The photograph was flashed around the world the following week.

Maynard said his staff identified Nelms and the CBC reporter as a possible issue during the shoot and confirmed their suspicions after the story broke.

Gibb-Carsley also revealed that a China Southern Boeing 777 was privately chartered to take Meng back to China immediately if she had won last May.

He said members of the Chinese consulate were involved in making the arrangements to charter the plane, which can carry up to 368 people and has a large enough capacity to make the non-stop journey to China.

The extradition proceeding itself is expected to get underway at the beginning of March and to continue in various stages until the end of April.

The first part of the proceedings will involve a defence bid to have the case tossed because of alleged violations of Meng’s rights.

Her lawyers claim she is being used as a political pawn by U.S. President Donald Trump and they also say the Canada Border Services Agency and RCMP conspired with the U.S. Federal Bureau of Investigation at the time of her arrest to deny her access to a lawyer.

The defence also claims that the U.S. deliberately misled Canada about the strength of the case against Meng and is reaching beyond its jurisdiction to punish her.

The final part of the proceedings will be a test of the strength of the extradition request itself.