The Red Planet could welcome a new visitor Thursday when, if all goes well, NASA’s Perseverance rover will be the latest spacecraft to travel to Mars.

All three missions launched within days of each other last July to take advantage of the close alignment of Earth and Mars, thus their close arrival times.

But the space vehicles won’t be alone, according to information from NASA and the Indian Space Research Organization.

Eight other spacecraft from several countries are already undergoing research on or around the Red Planet: five American spacecraft, two European and one Indian.

It’s quite a feat for a spacecraft to make it to Mars.

Since 1960, about half of all Mars missions have failed, with probes either crashing, burning up or otherwise falling short due the complexity of interplanetary travel and the difficulty of making a descent through Mars’s thin atmosphere.

Here is a roster of the spacecraft — new and old — actively researching Mars.

For over seven months, it travelled 480-million kilometres before it began circling the Red Planet. 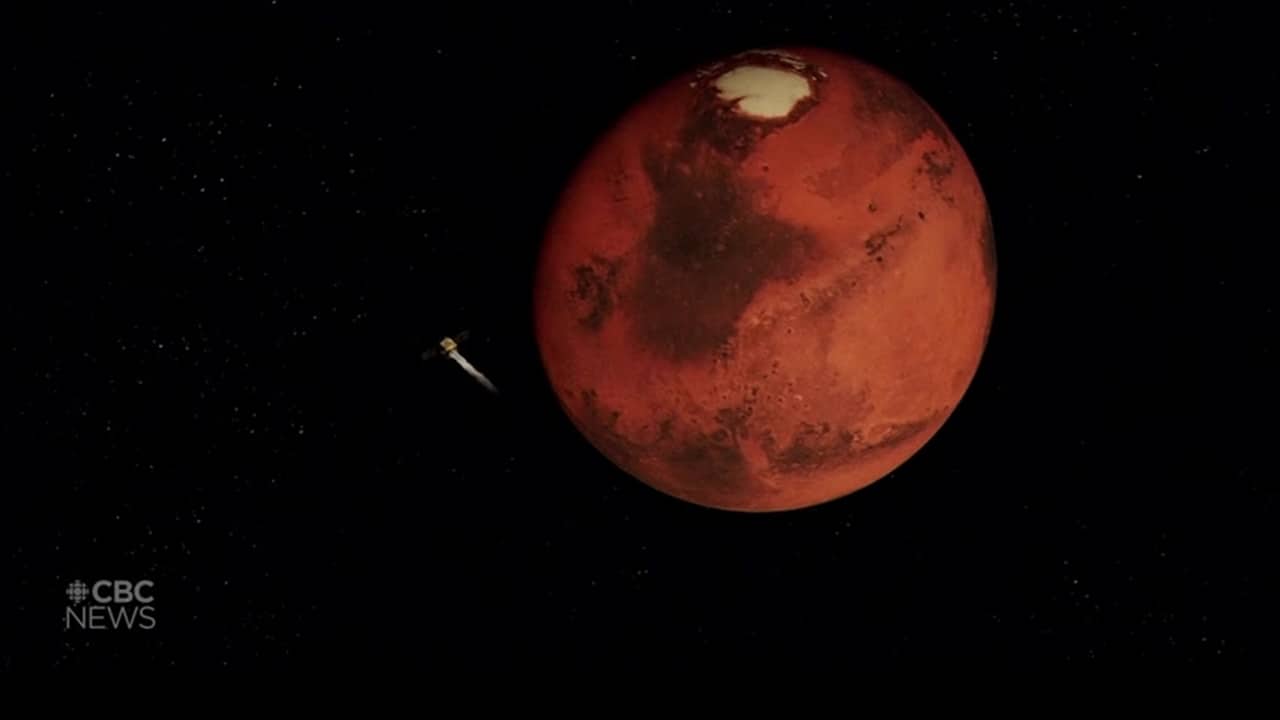 Amal orbiter is country’s 1st mission to the Red Planet. 1:11

If all goes as planned, over the next two months Amal will settle into an exceptionally high, elliptical orbit of between 22,000 kilometres and 44,000 kilometres above the surface.

From there, it will survey the planet’s mostly carbon dioxide atmosphere, at all times of day and in all seasons. But it will not land on Mars.

It’s on an expedition to land a rover on the planet’s surface and scout for signs of ancient life.

If all goes as planned, the rover will separate from the spacecraft in a few months and touch down safely on Mars, making China the second nation — after the U.S. — to pull off such a feat.

The solar-powered rover, about the size of a golf cart, will collect data on underground water and look for evidence that the planet may have once had microscopic life.

Perseverance is set to join the UAE and Chinese spacecraft near Mars on Thursday.

It will be the first leg in a decade-long U.S.–European project to bring Martian rocks back to Earth to be examined for evidence the planet once harboured microscopic life.

Perseverance — named by a middle school student in Virginia — will test “new technology for future robotic and human missions to the Red Planet,” according to a NASA news release.

Some of the spacecraft already on or orbiting Martian have been collecting data since the early 2000s.

NASA’s 2001 Mars Odyssey and the European Space Agency’s first spacecraft to visit another planet, Mars Express, are some of the oldest still working.

Many of the still-active missions are studying Mars’s atmosphere, like ESA’s Trace Gas Orbiter and NASA’s MAVEN.

India’s first venture into space, the Mars Orbiter Mission, is still in orbit and continues to study Mars’s surface and atmosphere.

For almost eight years, it has provided researchers with high-quality photos of the Red Planet.

Missions for some of the spacecraft have evolved over the years.

NASA’s Curiosity rover and its InSight Mission will soon assist the latest Mars rover, Perseverance, when it attempts to land Thursday.

If the landing is successful, NASA officials say the three landers will create the first meteorological network on another planet.